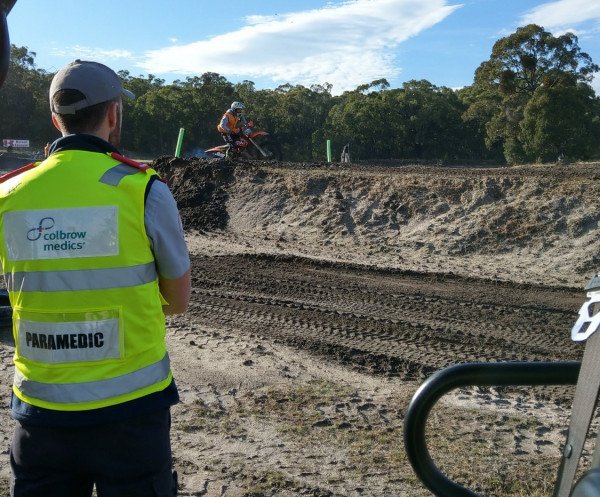 Colbrow Medics provides Event Paramedics and Medical cover to all types of motorsport including MotorX. During a regional motor cross event, a rider aged mid-50’s was competing in their fourth race of the day. Dirt bike motor cross events such as this are traditionally high risk and take place at purpose-built and professionally maintained dirt bike tracks across Australia.

Patient was observed having minor incident at the start line of the race, seconds after “race start”. This left patient to fall to the back of the pack, however, patient was able to re-mount motorbike and continue racing. Approximately 5 seconds later, on the first jump, patient was observed to lose control of bike resulting in high impact collision into ground. Patient observed laying face down, nil signs of movement. “Code 1” (highest priority medical request) called.

Medic approached the patient who still appeared motionless and prone.

The Colbrow Medic followed the general clinical approach and identified that an element of the primary survey (airway) needed to be addressed.

With the help of one race official, patient was rolled onto their back in a supine position. No response was obtained from the patient and an audible snore (indicative of an obstructed airway) was noted. Patient’s motorbike helmet was removed by cutting chin strap and safely removing helmet with consideration to both potentially injured spine and also the obstructed airway. The Medic utilised jaw thrust and application of supplemental 02 to mitigate airway obstruction. This was effective as the patient’s “snore” was stopped and an oxygen saturation probe showed no hypoxaemia.

This patient also had danger to their C-spine, another important element of primary survey. The mechanism of this incident indicated means of spinal precaution and immobilisation so the patient was fitted with a hard C-collar and placed onto a spine board for safe extrication.

After the primary survey was satisfied, the Medic communicated with the team of officials and first responders that the patient was relatively stable and the situation was not as urgent as it initially presented. A GCS score of 3 was obtained. After approximately 3 minutes of supplemental 02, the patient’s GCS rose quickly to 14, the patient losing only one point for appearing confused and having no recall of where they were or what had happened.

The current race had been “red-flagged”, however it is current practice to stabalise patient and conduct only completely necessary interventions in-field before transporting patient to Colbrow on-site medical facility, offering an experienced intensive care paramedic, privacy, appropriate monitoring and interventional equipment, and relative sterility. The patient’s chest and abdomen were briefly examined by attending medic’s before transport was deemed safe. The patient was transported safely by vehicle and spine board to on-site medical facility.

Upon arrival at on-site medical facility, patient was GCS 14, stable with symptoms of concussion. The dedicated Healthcare Professional onsite, in this instance a Qualified Paramedic; conducted a thorough secondary survey. This included a systematic clearance of each body region of any neurological defecits, ruling out any presently apparent spinal cord injury. A thorough secondary survey also confirmed no major injuries to the thorax, abdomen, pelvis or extremities. A PSA and RSA indicated good perfusion and no respiratory distress. A 4-lead ECG showed normal sinus rhythm. Blood pressure was noted to be within normal range, indicative of no major cerebral haemorrhage.

Within minutes, patient became GCS 15, aware of time and place. Despite this, patient had no recall of the last several hours or the accident.

Patient had a venous cannula inserted in case of deterioration.

Colbrow Medical Staff had built excellent rapport with the patient and the patient was very thankful for the care they received. The patient was transported to closest appropriate hospital for mandatory observation. Patient was discharged later that evening with no signs of further head injury and no other injuries found upon CT-scan. Patient returned home that evening and was able to resume responsibilities at work the next day. Colbrow Medics will continue to provide professional, high level medical coverage and Event Paramedics to our dirt bike and motor cross clients.