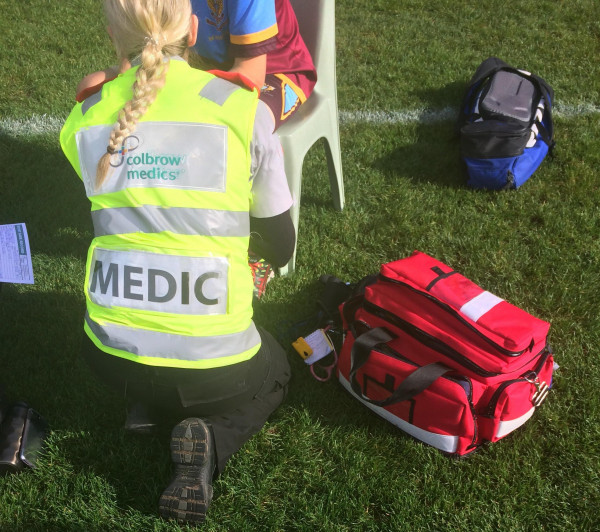 Colbrow Medics provides Event First Aid Medics and Sports Trainers to all types of events, schools and sporting clubs, including Football, Baseball, Netball, Basketball, Cricket, Hockey, F45, CrossFit as well as Horse and Pony Clubs throughout Melbourne, Sydney, Brisbane, Adelaide, Canberra, Perth & Hobart.  During a morning basketball event one of the basketball coaches,  in his 50’s, approached the first aid medic just after he had arrived for the day. He was assisting with coaching that day and did not have any additional stressors.

Patient walked to first aid with complaints of seeing stars in left eye peripheral vision and ringing in both ears immediately after getting up out of his car. Patient also felt dizzy and as though he was slightly removed from what was happening around him. Much of the patient assessment was completed outside as the patient was feeling overwhelmed by the sounds inside the basketball stadium. Patient was also walking much more cautiously, as if worried he might fall if he moved too quickly. When poking his tongue out it appears to deviate slightly to the right.

The Colbrow Medic followed the general clinical approach and found that the primary survey elements were all met and from there the medic rest and reassured the patient. The patient did not have the major signs and symptoms of a stroke as he did not have an uneven looking face, tingling or numbness in one arm or slurred speech. But the less obvious clinical signs and symptoms of a potential stroke were identified with his tongue deviating slightly to the right, slowed speech, dizziness, stars in left eye peripheral vision, ringing in both ears and a feeling of everything being a bit surreal. The patient provided with 300mg of aspirin and was moved outside slowly in order to place the patient in a position of most comfort.

As the patient was moved outside, one of the other coaches called 000. The patient was then checked again for major signs and symptoms of stroke as per request of the ambulance operators. The patient’s GCS was 15, his skin was warm, pink and dry and his speech was not slurred at all, but it was slower than normal, according to the other coach. The patient is calm and his breathing effort is normal. Ambulance arrived in under 10 minutes and began a set of observations. Systolic blood pressure was 130, blood glucose levels were 5.4, temperature was 36.3. Paramedics stated that the patient’s vital signs don’t show any immediate life threatening emergency but that he should be transported to hospital due to his irregular symptoms. While the patient is unsure if he needs to go to hospital the Colbrow Medic, paramedics and the patient’s colleague convinced the patient that it is a good idea for him to be checked out at the hospital.

Patient was taken to hospital by the paramedics to query his symptoms.

The Colbrow Medic built excellent rapport with the patient and convinced the patient to continue on to the hospital with the paramedics, based upon his unusual signs and symptoms. The patient was transported to the nearest appropriate hospital for further observation. Colbrow Medics continue to provide a high level of professional first aid to not only the players but also to the spectators at every event.